A hydroxyl generator is an advanced air purifier that permanently removes odors and allergens by attacking bacteria, mold spores and airborne pathogens. Unlike air purifiers that simply trap particles, the Hydra Waterfall uses PhotoCatalytic Oxidation (PCO) technology to breakdown and destroy airborne contamination including viruses.¹ The Hydra Waterfall is a true hydroxyl generator, which means that it does not generate harmful ozone and is safe to use continuously in occupied areas.

The Waterfall operates on USB power for use anywhere. The unit includes a replaceable pre-filter and carbon post-filter, true 275nm germicidal LEDs, light-activated catalyst and a quiet but powerful centrifugal blower fan. The discharge end has a stainless steel louvered cover to block harmful UVC germicidal light. Inside the device, the UV wavelength excites nano-sized particles of Titanium Dioxide that generate hydroxyls. The unit's germicidal light also sterilizes air inside the unit. The Waterfall can set horizontal or vertical so that it can fit in as little as a 4-inch square space.

PCO hydroxyl generation, originally developed by the National Aeronautics and Space Administration (NASA) to purify air onboard a space station, is ozone-free and safe to use indoors for continuous operation. Photocatalytic Oxidation is FDA-approved for use in Class II medical devices such as air purifiers, N95 respirators and infusion pumps. 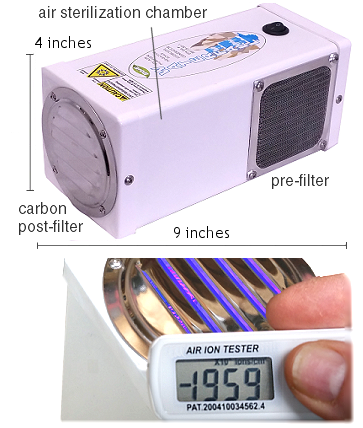 Health Benefits from Hydroxyls Include:

Health Benefits from Negative Ions Include:

About Hydroxyl Technology:
Hydroxyls are omnipresent in nature, forming when UV light from the sun splits apart water molecules in the air. The resulting hydroxyl radicals instantly oxidize thousands of outdoor pollutants. Hydroxyls are nature's primary method of cleaning contaminants from the atmosphere using only sunlight and water vapor. Hydroxyls also kill germs in outdoor air, making it harder for viruses to survive and spread outdoors. The Waterfall uses UV light and a catalyst to mimic the reactions that generate hydroxyls, to cleanse indoor air.

Inside the Waterfall's reaction chamber, inorganic and biological contaminates are destroyed on contact with the catalyst surface, including the most resistant strains of bacteria that can survive long periods of exposure to both UV light and household cleaners. In addition, hydroxyls break down odors trapped in the air from mold, formaldehyde, smoke, sewer gas and many other contaminants, reducing them down to carbon dioxide and water. The unit's germicidal light also sterilizes its chamber to keep it germ-free.

Bottom Line:
The Hydra Waterfall is great for cleaning small occupied spaces by running the unit continuously. Hydroxyl generators won't damage plants or sensitive materials. The Hydra Waterfall's compact form factor allows it fit on small desktops, tables and shelves. It reduces the spread of mold spores and other allegens while providing the benefits of negative ions.

Like all BoiE products, the Hydra Waterfall was designed by indoor air professionals to outlasts and outperform the rest.

Hydroxyl Remediator Certification (Limited Time Offer)
Your purchase includes BoiE's exclusive 32-hour, comprehensive Ozone and Hydroxyl Remediator certification course. Learn how to utilize hydroxyl generation and properly apply ozone for odor removal, disinfection and restoration applications. Learn the protocols, how to identify and assess the source of odors, corrective measures and preparing treatment reports. Provides a path for starting a new business or expanding your current services. Course includes a helpful Online DVD with demonstration videos. You can enroll and simply use the course material as a reference if you don't need the certification.